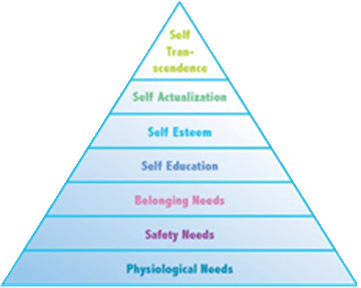 In order to develop personally and professionally, it is necessary to learn more about the self, and draw on different psychological theories that assist us in learning why we think, feel and behave in the way we do. I train clients to become aware of their unconscious drives that inhibit joyous self-exploration and teach them how to actualize and transcend self. All potential lies within, so using a quantum frame of reference, reflexivity, mindfulness and counselling skills such as active listening and empathy, the client begins to fully experience and transform the self. Personal development is a continuous process that ensures well-being, when we fully understand its depth.

Drawing on ancient wisdom traditions and the entire spectrum of psychological theories, my approach brings a holistic spectrum to personal and professional development. Life choices in terms of career or personal life patterns are based on thoughts, feelings and actions. The need to honour self is one of the most important aspects of personal growth, but this is not fully possible unless all unconscious drives and needs have been transmuted.

This is what is unique to the way in which I work in a quantum field of potential, ensuring that the sacred aspects of self are reactivated in order to restore harmony and balance to the self. I also train my clients to become global citizens and to reflect on what it means to be human and yet to embody divine aspects.

A TRANS-PERSONAL AND INTEGRAL PERSPECTIVE

The idea of the transpersonal was first born through James (1985) during his Gifford lectures at Edinburgh. He argued that radical empiricism was needed to investigate experience as part of psychology. In the 1960s, the term radical empiricism was used to refer to areas of human experience that moved beyond the ego and personality into the realm of the mystical. A seminal inquiry by Boucouvalas (1980) identified four levels or spheres of study imperative to understanding existence; individual, relationships/group, societal and planetary/cosmic.

Human beings are part of a cosmic system and as long as they follow ideas of separateness they fail to acknowledge and contribute to the importance of evolution. Consciousness has multilayered aspects of existence that begin with archetypes – those figures that embody our ideas of evolution in perfection. These archetypes evolve from being physical bodies to that which is formless but still exists within patterns of consciousness.

These are the essential aspects of self that I encourage my clients to re-discover within, as they suggest that development occurs holistically (as a whole) and that each individual may affect this whole by re-envisioning their own inner world. Archetypes as described by Jung (2008) are archaic, culturally imbedded images charged with strong emotional tones that attach importance to symbols and symbolism. There is a plurality of meaning associated with symbols that could have different interpretations in various cases. Jung saw symbols as being regressive as well as progressive, messages coming from the unconscious that had value and purpose of a spiritual nature.

Von-Franz (1995) described the awakening of consciousness in creation myths as movement from above to below and below to above. This upward and downward movement played an important part in myth, acting as a reminder of the downward directional movement into the lower unconscious and the ascendant direction towards transpersonal development (Assagioli, 2008); in development, as Assagioli pointed out, the lower was of equal importance to the higher, and becoming aware of both brought about a change in consciousness.

My work is about changing perspectives and bringing about paradigm shifts not only on a personal level but in the collective as well. The universality of archetypal images imply more than personal consequence. By raising the soul beyond its egocentric confines, the word archetypal points to something of value. There is both an intentional force, as in the case of Jung’s (2008) instinct, and the mythical field of personifications, as in the case of Hillman’s (2004) Gods.

In order to actualize and transcend the self, one must have self-knowledge which in turn brings self-esteem. I create individual programs for clients according to their needs, and train them to use active imagination, sacred symbols, myth, mindfulness, active listening, empathy, acceptance and non-judgment, in order to enhance self and to develop personally, professionally and trans-personally.

Sessions last from 60 minutes to 120 minutes in a warm and safe environment in-house or on skype.